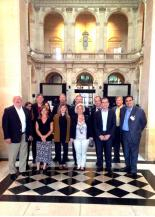 After a 2-day visit to the region from a delegation of American health and biotechnology companies from southern California, it is now time to take stock and follow up on professional exchanges between San Diego and Provence. Provence Promotion and a group of economic players know their game partners well. These field missions are organized yearly together with the California-based French Bio Beach association, with official support from the Provence-Alpes-Côte d’Azur Regional Council since 2013 under the joint banner “South Bio Alliance”. A wrap-up and outlooks following the 2015 edition…

Market opportunities, technological and scientific partnerships and the opening of European subsidiaries – these were the needs that the American companies expressed during their field visit. The delegation, which included entities ranging from SMEs to major groups, followed a tightly packed but well planned program during their 2-day visit from April 29 to 30, and were rapidly able to get an idea of the Aix-Marseilles region’s potential in terms of medical research and innovation in their fields of interest: cancer, obesity, cytometry…

Their first important stop was at Luminy in Marseilles, which houses the immunology center and various landmark companies in the health sector. Innate Pharma, which has just signed a contract with the British AstraZeneca for cancer treatment through immunotherapy, or HalioDx that is currently carrying out a survey among 3,000 patients in 25 European centers to test diagnostic kits for immune-oncology, caught their interest, as did the presentation of MI-mAbs, a preindustrial demonstrator in which Sanofi has confirmed its commitment alongside various local stakeholders to accelerate the development of new immunotherapy antibodies (€19 million investment).

The delegation continued their discovery of research and innovations in Marseilles at La Timone Hospital (AP-HM) in the development and Clinical Research and Innovation departments. With the building of the largest infection center in Europe (€70 million investment), La Timone will increase its international status. On the subject of development, Satt Sud-Est presented its programs to further the transfer of academic-research innovations towards international markets.

At the Institut Paoli Calmette (IPC), a center of excellence in cancer research, the delegation was received by Dr Jean-Frédéric Saunière, coordinator of translational research teams, who reminded them that the institute focuses consistently on new technologies and has a spin-off incubator for the development of new cancer drugs and therapies.

Other topics like legislation, labor law and research tax credit were broached in order to demonstrate the amount of flexibility that there is to carry out projects with the help of benefits and support. Fighting preconceived notions and changing the perception that Americans have of France are also part of Provence Promotion’s missions as an economic development agency.

Biocom, one of the most important life-sciences associations in the world that represents more than 650 biotechnology companies as well as pharmaceutical product and medical and diagnostic equipment manufacturers throughout South California, participated for the second time. Having joined forces in 2014 with Eurobiomed, the competitiveness cluster in the south of France, they are continuing and will reinforce joint projects in the scope of their cooperation.

Thanks to the good understanding and affinity between the two regions, there is also the possibility of getting sport-related projects off the ground.

Note that American companies are the first to come and invest in Provence. In 2014, they represented 20% of all companies located in Provence-Alpes-Côte d’Azur. In 2014, they represented 20% of all the foreign companies set up in Provence-Alpes-Côte d’Azur. In the scope of its prospecting missions, Provence Promotion prepares an upcoming visit to the United States in order to participate in the Bio-international Convention taking place in Philadelphia this year.