Biotech convo: A look ahead 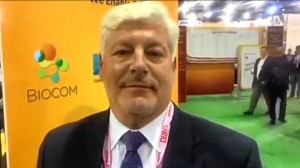 Biocom's Joe Panetta discusses themes at the 2015 BIO conference in Philadelphia, and San Diego biotech's plans for the 2016 meeting in San Francisco and the 2017 meeting in San Diego. — David Schull

This year's Biotechnology Industry Organization's convention in Philadelphia was on familiar ground for Joe Panetta, CEO of San Diego-based Biocom, who grew up in the region.

Panetta talked with David Schull of Russo Partners on location about the convention's themes, and its return to San Diego in 2017, which hosted the convention in 2014.

BIO meets next year in San Francisco, Panetta noted, and Biocom plans to take advantage of that.

"We see this as a two-year opportunity for San Diego," Panetta said. "Next year BIO will be in San Francisco, but our San Diego Biocom group will have a very strong influence on that meeting, and of course we'll be in San Diego the following year."

Those meetings will stress aspects of the biotech industry that play to San Diego's strengths, including big data, wireless health and targeted therapeutics.

At the 2015 Philadelphia meeting, digital health and personalized medicine were among the topics that resonate with San Diego biotechs, Panetta said.